7.00pm Wed 24 Jun 2020
Billy Kay is a Scottish writer, broadcaster and language activist. He studied English Literature at the University of Edinburgh.

Billy Kay is a Scottish writer, broadcaster and language activist. He studied English Literature at the University of Edinburgh.
livestream by
Independence Live

As the media we will be covering this event just like all the other media who will be there. We absolutely do not encourage anybody to go to this or any other demo while there is a covid19 pandemic. More details about this event and keeping safe can be found at Stand up to Racism Glasgow event: https://www.facebook.com/events/193694041943321/ For all attending the event: ⚠️ Please do not use public transport ⚠️ Please do not travel further than public health allows ⚠️ Please wear a mask and respect the 2-metre distancing our stewards team will have in place ⚠️ Please follow the instructions of the stewarding team at all times ⚠️ Please leave together at the end of the event #TakeTheKnee #BlackLivesMatter #EndHotelDetention *** This is an Independence Live production being streamed to our social media network. Support our crowdfunder: https://tvl.ink/crowdfunder OUR STREAMING CHANNELS: https://independencelive.net https://youtube.com/IndependenceLive https://facebook.com/IndyLiveStream https://twitter.com/IndyLiveStream https://pscp.tv/IndyLiveStream https://twitch.tv/IndyLive Independence Live: https://independencelive.net 1000s of streams since 2013. [email protected] IndyLive Radio: https://indylive.radio News, music and indy since 2019. [email protected] #BeTheMedia join our grassroots team. DONT HATE THE MEDIA, BECOME THE MEDIA [email protected] [email protected] NEWS YOU DONT HEAR NEW VOICES FOR A NEW SCOTLAND
livestream by
Independence Live 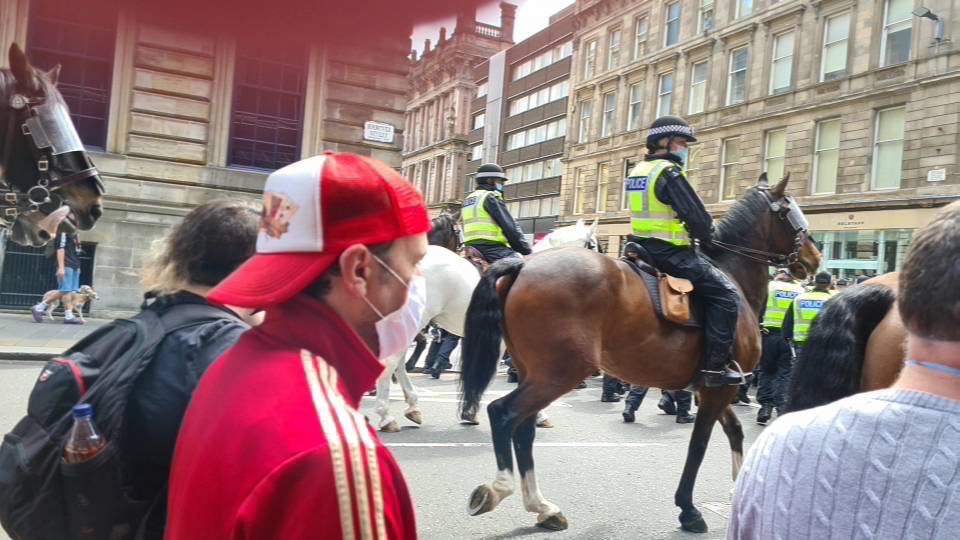 7.00pm Thu 18 Jun 2020
John Robertson is a retired professor of media studies from the University of West of Scotland.

Building the Scottish State - Dr Mark McNaught, interviewing John Robertson John Robertson is a retired professor of media studies from the University of West of Scotland.

Online event from Stand up to Racism - Scotland. Speakers include @RozFoyer, @HumzaYousaf, @AnasSarwar, @robinaqureshi, @AamerAnwar All speakers: https://www.facebook.com/events/451610132373748/ SPEAKERS - Michael Brown, Black Lives Matter chapter co-founder from Long Beach, California - Humza Yousaf, Scottish Government Justice Secretary - Anas Sarwar, convenor of Holyrood Cross-Party Group on Tackling Islamophobia - Rozanne Foyer, STUC general secretary designate - Aamer Anwar, Sheku Bayoh's family lawyer - Robina Qureshi, Positive Action in Housing director - Weyman Bennett, Stand Up To Racism national co-convenor Others TBA The racist murder of George Floyd by a police officer in the US has sparked a wave of opposition to racism and millions of people across the world taking a stand to say #JusticeForGeorgeFloyd #BlackLivesMatter Ethnic minorities being killed at the hands of the police is far from an exclusive problem of the US. In Scotland, the family of Sheku Bayoh, who died in Kirkcaldy in 2015 after being brutally restrained by police officers, is still fighting for justice. Meanwhile, the disproportionate impact of COVID-19 on BAME communities has shone a light on systemic injustices and institutional racism, but the government has attempted to cover this up by removing a section of the Public Health England report on institutional racism. Stand Up To Racism has launched a statement calling for an independent public inquiry on disproportionate BAME deaths during the pandemic. You can sign it here: https://bit.ly/sutrstatement Join this rally discussing how we can fight for justice for BAME communities and turn the new wave of anger over racism and injustice into an effective movement for change.
livestream by
Independence Live 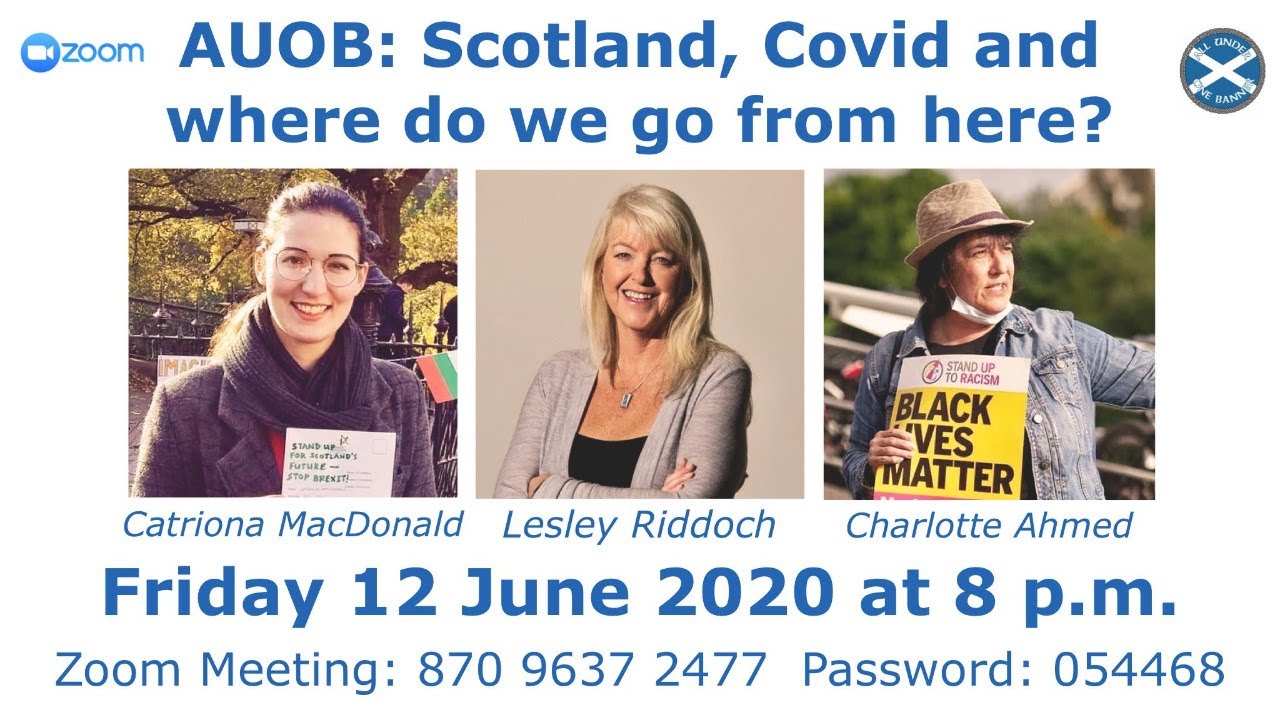 AUOB panel discussion: Scotland, Covid and where do we go from here. @AUOBA

AUOB panel discussion: Scotland, Covid and where do we go from here. @AUOBA With Lesley Riddoch, Catriona MacDonald and Charlotte Ahmed.

AUOB panel discussion: Scotland, Covid and where do we go from here. @AUOBALBA With Lesley Riddoch, Catriona MacDonald and Charlotte Ahmed. Online event/live from AUOB: https://www.facebook.com/events/596448220985296/ The next in our series of AUOB Friday night talks on Zoom - a panel discussion with Lesley Riddoch, Catriona MacDonald and Charlotte Ahmed. "Scotland, Covid-19 and where we go from here?" As our country begins down the route out of months of lockdown, AUOB promotes an open and informed online discussion about what the crisis has taught us, what lessons we can learn and the changes that we can make to our society as a result. We are very lucky to be joined at 8 p.m. on Friday 12 June 2020 by: Lesley @lesleyriddoch is a writer, broadcaster and activist. She co-founded the think-tank Nordic Horizons and wrote “McSmorgasbord: What post-Brexit Scotland can learn from the Nordics” in partnership with Eberhard Bort. Earlier this year she co-created the film “Declaration, the letter of liberty” about the Declaration of Arbroath which is here: https://vimeo.com/401599947 . Lesley's weekly podcast is here: https://rqs.libsyn.com/ . Catriona @catrionasnp co-owns and runs a café and art space in south Edinburgh. She is co-founder of a local Common Weal chapter and is Community Officer for Joanna Cherry QC MP. She stood in Edinburgh South in the 2019 General Election. Charlotte is a secondary school teacher in Glasgow is also an activist, campaigning with her trade union the EIS and with Stand Up To Racism and the Covid Action Group.
livestream by
Independence Live

7.00pm Wed 10 Jun 2020
Born in Dallas, Texas, Joe Goldblatt wound up as Emeritus professor at a Scottish University. A renowned author, Joe is also a strong supporter of Independence.

Born in Dallas, Texas, Joe Goldblatt wound up as Emeritus professor at a Scottish University. A renowned author, Joe is also a strong supporter of Independence
livestream by
Independence Live

7.00pm Tue 9 Jun 2020
Craig Murray is due to undergo persecution by the State regarding articles he wrote about the ALEX SALMOND TRIAL. Tonight, the Twa Auld Heids talk with the other independent journalist charged with offences stemming from that trial, MARK HIRST, and dig...

Twa Auld Heids interview Mark Hirst Craig Murray is due to undergo persecution by the State regarding articles he wrote about the ALEX SALMOND TRIAL. Tonight, the Twa Auld Heids talk with the other independent journalist charged with offences stemming from that trial, MARK HIRST, and dig...

Craig Murray is due to undergo persecution by the State regarding articles he wrote about the ALEX SALMOND TRIAL. Tonight, the Twa Auld Heids talk with the other independent journalist charged with offences stemming from that trial, MARK HIRST, and dig into the toxic underbelly of the relationship between Press and State in THE COSY CLUB. (TO BE CONTINUED...)
livestream by
Independence Live

Online ZOOM event by the STUC. https://www.stuc.org.uk/ Confirmed and invited speakers (others to be announced) Kadie Johnson: Sister of Sheku Bayoh Aamer Anwar: Lawyer for the Sheku Bayoh Family Layla-Roxanne Hill: STUC Black Workers Committee Suki Sangha Cllr Graham Campbell: SNP NEC BAME Convener Usman Ali: Chair STUC Black Workers Committee Anas Sarwar MSP Hannah Lavery: Playwright Rozanne Foyer: General Secretary Designate STUC The events over the past weeks have shone a light not only upon the ingrained racism in the US, but across the world, not least in Scotland and the UK. The STUC fully understands the depth of anger and desire to show solidarity that is moving people to attend the physical rally in Glasgow Green on Sunday. However, given the threat to our communities of coronavirus, we cannot in all conscience advise people to attend that event. But people want to protest. And people want to know what they can do. A fresh light has been shone on the death and injury of black and minority ethnic people in the Scottish and UK justice systems. It is a violent and sickening symptom of a deeper and wider problem which poses questions for all of our institutions. These are questions that the STUC Black Workers Committee has consistently sought to address, but all too often their voices and the voices of all black workers in Scotland have not been heard. The imperative to recognise our own privilege and challenge ourselves at this time extends to the trade union movement. This moment demands that we never be satisfied with our responses thus far. It is our duty to ensure that what is happening now is not just a moment of anger and solidarity. Rather our duty is to make this a beginning of an examination of our response to racism and our commitment to stamp it out. The STUC begins that process, following consultation with BAME trade unionists and other activists, by recommitting to the Justice for Sheku Bayoh Campaign. Sheku’s family have fought for justice for over five years. Each and every one of us has a duty to right that wrong. In righting that wrong we can begin a journey to challenging a thousand injustices and rooting out the deep-seated racism within our society. Stream by Independence Live, streaming since 2013
livestream by
Independence Live 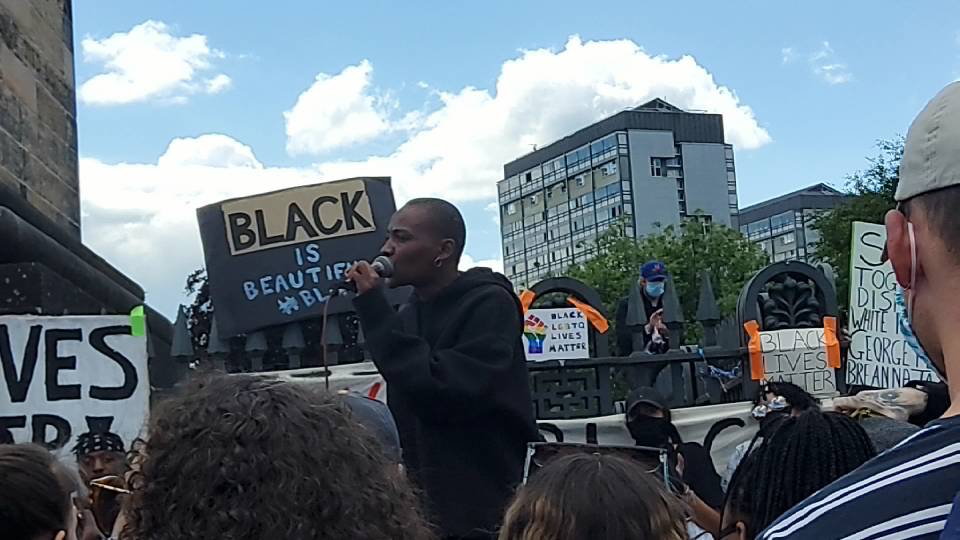 A peaceful gathering to show solidarity with the BLM movement in the US and with our brothers and sisters all around the world fighting for justice and equality. The world mourns the murder of George Floyd and we must show that this sentiment is echoed in every corner of our communities. #JusticeForGeorgeFloyd #BlackLivesMatter Some ways to help if unable to attend: Text “FLOYD” to 55156 and sign Text “JUSTICE” to 668366 https://secure.actblue.com/donate/ms_blm_homepage_2019 https://www.change.org/p/change-org-the-minneapolis-police-officers-to-be-charged-for-murder-after-killing-innocent-black-man https://www.justiceforbigfloyd.com/ https://www.change.org/p/mayor-jacob-frey-justice-for-george-floyd? Livestream production by Independence Live. Scottish Government advice regarding social distancing and face coverings will be followed at all times. https://independencelive.net 1000+ livestreams since 2013 https://indylive.radio Music and talk since 2019 Please help keep us LIVE! https://tvl.ink/crowdfunder DONT HATE THE MEDIA BECOME THE MEDIA!
livestream by
Independence Live

Michelle Thomson is a passionate and committed independence supporter. A member of the SNP from aged 16 she was the Managing Director for Business for Scotland during the Independence referendum of 2014 and took part in over 100 speaking engagements as well as extensive media appearances during this time. She was the SNP MP for Edinburgh West from 2015-2017. She now runs Momentous Change http://momentouschangeltd.co.uk with former colleague Professor Roger Mullin. Much of the work they do also strives to make Scotland a better place such as their recent publication into harnessing the power of the Scottish business diaspora.
livestream by
Independence Live